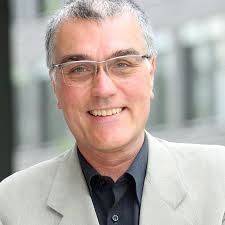 Thomas Metzinger is currently Professor of Theoretical Philosophy at the Johannes Gutenberg-Universität of Mainz (DE) and an Adjunct Fellow at the Frankfurt Institute for Advanced Study (FIAS). He is also Director of the Neuroethics Research Unit in Mainz and Director of the MIND Group at the FIAS.

Thomas is past president of the German Cognitive Science Society (2005-2007) and of the ASSC (Association for the Scientific Study of Consciousness) (2009-2011). His focus of research lies in analytical philosophy of mind and cognitive science, as well as in connections between ethics, philosophy of mind and anthropology.

In the English language, he is the author of “The Ego Tunnel: The Science of the Mind and the Myth of the Self”, and editor of two collections, Conscious Experience, and Neural Correlates of Consciousness, as well as a scientific monograph, “Being No One: The Self-Model Theory of Subjectivity”. His two open access collections are Open MIND (2015), followed by Philosophy & Predictive Processing (2017).